My mini haul: Mac and the 7 magazines 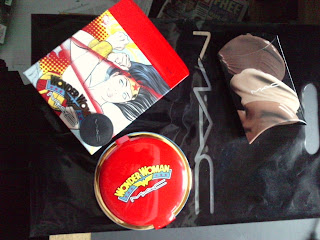 So the Wonder Woman collection came out last Thursday at Mac counters. I dashed over there as soon as I could to pick up Pink Power, the only thing I was interested in. Good thing too, since it sold out like hotcakes – I checked back two days later and there were ‘Sold Out’ stickers dotted everywhere!
You’re probably sick and tired of seeing photos like these now, but here it is again! I should have included a photo of my hand holding it really, since the thing is BIIIIG! It’s larger than my palm and actually reaches the middle joint of my fingers. Granted, I’ve small hands to complement my small size 3 feet, but I’ve yet to come across such gigantic makeup items before. Bobbi Brown’s compact foundation is a very far second place indeed. I also asked for a Studio Finish foundation sample since my last one did not match. It’s so annoying how I’ve now been matched to NC 30, NC 25 and this time NC 20 in the span of a season – all because the makeup artist was different. This time, at least I didn’t fork out any money for the mistakes.
Also, I grabbed 7 magazines too, since some great freebies were given with them. I got a copy of Marie Claire with a Cowshed body lotion and 7 copies of Glamour for the Clinique goodies. Yes, the checkout lady looked at me strangely. As did my friends when I distributed 6 copies of Glamour to them. See what I have to put up with in a non-makeup addicted real world? 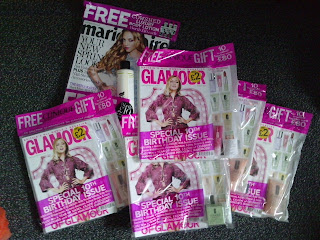 The Clinique freebies I chose were: 3 Moisture Surge moisturisers, two All About Eyes, 1 Take The Day Off and 1 moisturising lip balm gloss tube thing (you can tell I’ve forgotten the name, right?).
I’ve seen quite a few Glamour/Clinique magazine sprees lately, but would love to know if you succumbed to the temptation and bought a stack too. If so, what did you get?
Posted by ShimmerDreamz at 18:50

We don't get the freebies with the magazines over here! I think some of the staff remove the plastic covers & take the freebies cause mags always come without freebies ;( it's quite annoying. I would've done the same though.. buy 7 copies haha x

ShimmerDreamz
I'm a university student who likes to dabble in beauty and fashion in my spare time. This includes writing this blog and wasting an inordinately large amount of time shopping, or at least researching what I should buy.

Got questions? Email me at:
ShimmerDreamz@gmail.com